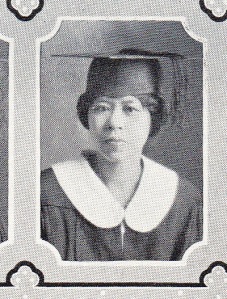 Researchers who have spent time studying the sociology of race in Hawai‘i are familiar with the name Margaret Lam. Her MA thesis (“Six Generations of Race Mixture in Hawaii,” UH 1932) was the first study to trace the genealogy and background of the Beckley’s, a prominent and well known hapa Haole family. Bob Dye’s Merchant Prince of the Sandalwood Islands follows the story of one of the members of this family, Julia Hope Kamakia Paaikamokalani o Kinau Beckley Fayerweather who married the Chinese merchant of the title, Chun Afong.

Margaret also published five articles in several sociology journals.  Romanzo Adams, in his book Interracial Marriage in Hawaii  acknowledges her “unique service in interviewing various racial and mixed race groups and in securing data related to the family histories of several of the old mixed blood families” (Interracial Marriage in Hawaii, p. vi).  She was one of only four people singled out so her contribution must have been significant.

That is about as much as can be said about Margaret’s public life other than the fact that she graduated from McKinley High School, taught at the Pa‘aulio school in the Hāmākua district on Hawai‘i Island, matriculated at UH where she earned a BA in 1929 and an MA in 1932. After World War II she taught social studies at Farrington High School. She apparently never married or had children and died in 1999 at the age of 93 or 94.

Margaret Lam is listed as a teacher at the Pa‘aulio School, Hāmākua District, Hawai‘i Island in 1927 (Department of Public Instruction, Term Reports, June 1927.  Archives of Hawai‘i)

In the RASRL Collection, however, Margaret sometimes seems to be omnipresent. There is evidence of her work – transcripts of interviews with a discrete “ML” handwritten in the margin. Bernhard Hormann and Andrew Lind saved some of her correspondence in spite of the fact that she often asked that they destroy it to preserve the confidential nature of the contents. And she is mentioned – sometimes in sardonic tones – in the letters of Romanzo Adams and Clarence Glick as well.

We became curious about Margaret because she is something of an enigma. She was clearly brilliant or at least highly motivated to succeed. She was a Chinese-American woman who garnered the respect of the White men who were the senior scholars in the field. She held her own in graduate classes, unafraid of presenting her research to be challenged and critiqued. She was a local girl who apparently loved the bracing weather of a Chicago winter. When the University of Hawai‘i received funding to support work on the study of race, Margaret was hired as a research assistant and worked for the Social Research Laboratory from 1930 to 1937, longer than any other graduate student.

But she was also mercurial, a vexing presence in the Department. She jealously guarded her research, but seemed eager to help others who were unfamiliar with the local environment or lacked her expertise at interviewing subjects. She was high strung and suffered bouts of melancholy. She was slightly built, frequently ill, perhaps a bit of a hypochondriac. She wrote long, chatty letters to Andrew Lind and Clarence Glick in which she spelled out her frustrations and dissatisfaction. She complained bitterly when she thought she had been slighted or disrespected (she and Adams seem to have fallen out over something that “deeply wounded” her). But she was also an energetic researcher who worked long hours for days on end until she “ruined” her health. She spoke Chinese and pidgin which gave her entrée to the homes of local informants who provided qualitative data for the work of Adams and other scholars from the continent. Margaret spent three terms at the University of Chicago, but told Andrew Lind that she did not aspire to get a PhD.  She published her last article in 1938, but she apparently returned to Chicago periodically, ostensibly to take classes or consult with members of the sociology department there.

What can we make of Margaret? Her scholarship was important, but it is now overshadowed by Adams and other members of the “Chicago School” of sociology who used her research – transcripts of an unknown number of interviews with local people – in their own work. Her “cases” are now indistinguishable from the thousands of pages of notes saved but not attributed to a single individual. The RASRL Collection contains some of her letters but few responses. As such, we only have her side of the story and no way to verify anything she said. She also wrote in confidence, begging her colleagues not to reveal the contents of her letters. The scandals and gossip she alludes to are no longer salient to the living or the dead, but to discuss them or attempt to ferret out the substance of her accusations and make them public seems disrespectful to her memory.

Why does Margaret matter? We may not have enough information to write a fully fleshed out biography of Margaret Lam, but there are at least a few reasons that her story matters. She was, in the words of Henry Yu, a “thinking Oriental.” Yu argues that Asian American scholars of this era played a significant role in the sociology of race. Their work was overshadowed by White researchers, but because they were dealing with issues pertaining to Asian immigrants and Asian American communities, their work was rarely part of the race relations narrative that was dominated by the study  of African Americans and Whites. (Henry Yu, Thinking Orientals).

Margaret was a woman pursuing an advanced degree and scholarly research at a time when it was uncommon. She started her career as a primary school teacher because it was the profession most  accessible to her, but given the opportunity she quickly became focused on research and her intellectual life.

Margaret was local. She provided access to the local community for White sociologists who wished to study them. She did pioneering ethnographic research long before it was a standard methodology in sociology and decades before ethnic studies made the struggles and perspectives of ordinary people the subject of serious scholarly research.

Margaret’s life provides some insight into how the Social Research Laboratory worked, but also some perspective on how women fared in this competitive environment.  She held her own, but her ambitions seem to have been thwarted or at least cut short.  She is easy enough to dismiss or downplay, but her constant presence in the RASRL Collection is at the very least provocative and deserves some of our attention.

“Racial Myths and Family Tradition-Worship Among the Part-Hawaiians.” Social Forces 14:3 (1936)