Hawaii’s public schools were unofficially segregated for most of the Territorial Era, from the 1920s to the 1950s. Under pressure from a growing number of White migrants, the Department of Public Instruction (DPI) implemented a program of selective admissions based on English language abilities. English Standard Schools (ESS) were open to students who could pass a test certifying their mastery of English.  As a result, local students who were bilingual or spoke pidgin were inevitably disqualified. The result was a segregated public school system in which local students rarely associated with Haole.  Consequently, both Haole and local students who arrived at the University of Hawai‘i were unused to socializing or working across racial lines.  The nature of social life and interactions was a subject for some of the papers in the RASRL Collection.

To analyze campus student life, RASRL writers designed and conducted surveys to find out who was cheating in classes and how. They interviewed fellow students to gauge attitudes about inter-racial dancing, dating, and socializing. They tested the hypothesis that racial bloc voting dominated campus elections. They categorized the student body into types – bookworms, social butterflies, and leaders, those who managed to strike the balance between the co-curricular and academics. They observed their dorm and boarding house mates’ bathing and dietary habits and measured them against their own. They tried to faithfully record the exchanges they heard during “bull” and “hen” sessions. As is always the case in the RASRL papers, the writers took notice of race, or what we more likely would call ethnicity and culture.

Many campus clubs were racially and ethnically exclusive, a practice that continued at UH well into the 1960s.

This Chinese student was highly critical about what she saw on campus:

I feel that there is a great race problem here on the University of Hawaii campus. Just a quick look at the sororities will show you that there are race organizations more than anything else. The co-called sororities are merely Japanese, Chinese, Korean, Filipino, Caucasian and Cosmopolitan [the writer might be referring to Ke Anuenue, a social organization for women of Hawaiian ancestry] with a fancy Greek name. If you were to look over the university annual [Ka Palapala], you wouldn’t see a Caucasian girl in the Chinese sorority or vice versa. This is evidence that race plays a tremendous part and tends to segregate instead of assimilate groups (B.A., “A Personal Account of Race Relations,” mid to late 1940s, Box A-1).

A Haole writer who was a World War II veteran tried to take the long view about racial relations, believing like many others that given enough time and experience, groups would more freely mix:

One often seems to get the feeling that the “haoles” especially the “Malihinis” are seeking assurance from their own group, and so wish to ascertain the group’s behavior so as to have a guide. . . . If the “haole” group in general can give its members enough reinforcement in their interracial contacts, the future should bring an even greater “racial” harmony to Hawaii (R. W. C., “Personal Observations of Campus Race Relations,” 1949, Box A-1).

This Japanese writer had far less faith in a positive future for race relations:

. . . when groups gather there is never much said about race. It seems to me that there is an understanding here at the University that if anyone gripes about being discriminated against, it is because he has a chip on his shoulder or because he has it “in” for someone. There is not much sense for me, for instance, to discuss racial situations with my friends because we are all of the same mind and therefore hold the same opinions . . . but now after four years [at the University] we all have come to think that “to live and let live” is the best policy to follow where race is concerned. The few students we see on the campus eating together in mixed racial groups, or at picnics are but a mere fraction of the approximately 4,000 students who have enrolled. I think it is sad. The Hawaii that boasts of inter-racial harmony falls short of its mark (E.K, “Race Relations on the Campus,” 1949, Box A-3).

Although there were groups both on and off campus that provided opportunities for members of various ethnic groups to work and socialize, this astute Japanese writer was clear about where lines were drawn:

There is more cooperation in the political aspects of relations of the students more than in the social aspects. The reason is obvious. The political aspect is impersonal. But the social is personal. . . . a haole girl may campaign for a Japanese boy in the campus election. But she is cold towards him as far as personal relations are concerned. . . . However, all is not as gloomy and racially distant as it is made to believe. There are parties in which practically all racial groups are represented. The typical of these parties are the ones sponsored by the University YMCA and YWCA (K. N., “Race Relations at the University of Hawaii in the Light of Social and Political Contacts,” 1936, Box A-4).

A Haole student acknowledged how difficult it was to overcome the notion of white supremacy with which he had grown up:

It is indeed difficult for a college student to live up to the idea of race purity which is propounded by the group as a whole but which is torn apart by any rational convictions we are taught in the University (M. H., “Inter-racial Relationships in Hawaii,” 1949, Box A-2). 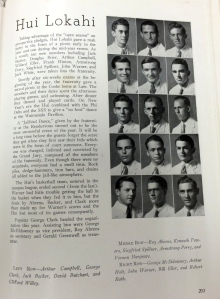 This writer tacitly acknowledged that students were expected to accept and associate with members of other racial and ethnic groups, something that was certainly implicit in sociology classes and at least in the early years of UH, commented upon and actively promoted in the campus newspaper, Ka Leo o Hawaii.  (Ka Leo issues from 1922 – 1949 and those from the 2000s are online.) 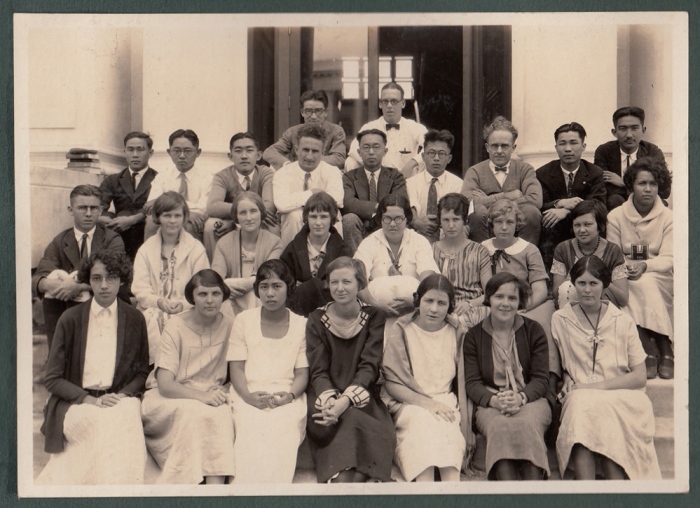 According to the Board of Regents report to the Legislature for 1923, the number of degree-seeking students was just shy of 300 but almost twice that of two years previous. The student population was small but it was diverse. The report goes on to mention that in this two-year period the number of Hawaiian and part-Hawaiian students increased from thirteen to thirty-five and the number of Haole, from fifty-six to ninety-nine.  Obviously, the Regents didn’t see the need to comment on the number of Asians on campus.

In the classroom, all students were on an equal footing. But high levels of co-curricular involvement that offered opportunities to mix and mingle weren’t always possible for local students,particularly those who needed to work their way through college.

In future posts, we’ll be looking at other aspects of UH student life:  life in dormitories and boarding houses, jobs students took to secure room and board and to pay the modest fees (Hawai‘i residents did not pay tuition), and why dancing might be dangerous.