Given the large number of student papers in RASRL, one might expect that a good share of them would be about education. After all, education was what brought RASRL faculty and students together. Yet only a handful of papers are about UH and none, in our search thus far, focuses on the public schools as institutions or communities or public school teachers as an occupational class.

Students, of course, did talk about education but as only one element in their life stories: challenges they faced in getting an education, the wonderful or horrible teachers they encountered on their journey to UH, what it was like to be Asian among mostly Haole in an English Standard school. Some grumbled about the lack of teaching jobs upon graduation (1927 was a very bad year) or resentment at being placed in rural schools (standard procedure for new graduates from Normal) or their suspicion that Haole were not only the first to get teaching positions but they got the best positions.

Then we came upon an oversize map from the RASRL collection that scatter plotted by race, of course, the Honolulu residences of public school teachers in 1931-32.

A small section of the map

This map, without a paper to make a case for its meaning or importance, had us scratching our heads about why they (and we’re not certain who “they” are) thought where teachers lived was important. But we had a date and the date was significant. 1931-32 was the first academic year that the Territorial Normal and Training School became Teachers College and merged with the University of Hawai‘i. Since we knew next to nothing about Normal, we decided to start there.

Formal teacher training began in Hawai‘i at the Fort Street School under the direction of its principal, Marion M. Scott. Scott implemented a program of systematic training, a process that differed from previous non-standardized methods. Henry S. Townsend, principal of Lahainaluna, was another early advocate for formal teacher training. When he became Superintendent of public instruction in 1896, Townsend hired James L. Dumas from Oswego Normal school in New York, a leading institution in teacher training. The Department of Instruction thought Dumas too young and inexperienced to assume responsibility for teacher training and instead assigned him to be the principal of Waihe‘e School on Maui.

By 1895 Hawai‘i had a Normal school department organized in Honolulu (later McKinley) High School and Dumas became principal. He attempted to impose the American normal school teacher-training model in Hawai‘i with a curriculum that emphasized the history of education as well as educational psychology. Not only was this material beyond what most of his twenty-one students could handle with their eighth grade educations but it would be of little use to pupils who had limited English ability. But Dumas did make headway. He was successful in establishing a training school in 1896 at Royal School, then called Honolulu Normal and Training School and changed to Territorial Normal and Training School in 1905. He secured additional funds for a new building and won approval for a three-year certificate for Normal graduates. However, In a February 1887 speech he precipitated his own downfall by expounding on his negative views on monopolies.  The oligarchs were not happy. (Linda Louise Logan, “Territorial Normal and Training School, 1895-1931,” dissertation, University of Hawai‘i, May 1989.)

For the first two decades of the 20th century, Edgar Wood was principal of the Normal School. According to Logan, Edgar Wood was someone who understood how to keep both the members of the Haole ruling class happy and Hawaiians in his corner. Wood emphasized the importance of vocational and agricultural training for Normal students and in turn, for students in the public schools.

Progressive educator Francis Wayland Parker had visited Wood who thereafter claimed that he followed Parker’s philosophy, one that was against standardization, isolated drill, and rote learning. However, Normal’s curriculum was essentially unchanged and highly prescribed in spite of his admiration for Parker’s practices and Wood’s claim that Normal was modeled on Parker’s principles. Wood ran a tight ship and reportedly reviewed each Normal student’s excruciatingly detailed lesson plans.  He also preferred Hawaiians as teachers.

For this reason, Wood resisted changing Normal admissions standards to require high school diplomas. He let it be known that if Normal required a high school diploma followed by two years of Normal training, few if any Hawaiians or part-Hawaiians would be eligible to attend Normal. Ironically, when these requirements were later put in place, the number of Hawaiian applicants increased.

Normal’s progress was erratic, subject to political and economic factors beyond the control of the School’s leaders. Budget cuts were a perennial problem as was oversight and interference by the Department of Public Instruction. Hawaii’s growing middle class demanded more sophisticated education for their children, something more than just vocational training. Escalating school enrollments made it difficult to train enough teachers. According to Logan, in 1910, 20% of the teachers were uncertified.

By 1920, the progressive movement in education, which had been championed by Townsend and Dumas, had gained strength, making Wood’s removal not only necessary but possible. While Wood was on a one-year leave of study, modifications to Normal’s entrance requirements were put in place.  Normal  also changed as the result of the influence of educators such as Miles Cary, who taught at McKinley and later became the school’s principal in 1924, and Benjamin Wist, who taught for several years at neighbor island schools before being appointed Normal School principal in 1921.

An important part of the impetus for change was a result of the findings of the A Survey of Education in Hawaii 1919.  One thing the report made clear:  the Territory did not have enough high schools to serve its population.  By 1938, O‘ahu had four new high schools in areas with large populations: Roosevelt serving Makiki and Mānoa; Farrington, serving the ‘Ewa side of urban Honolulu as well as Kalihi Kai and Uka; and secondary schools in the rural areas of Waialua and Waipahu.

By the time Wist took over in 1921, Normal was actually three schools in one. Students who had been accepted to Normal in 1919 were required to hold only eighth grade diplomas, those accepted in 1920 needed to have completed two years of high school, and those entering in 1921 had to possess a high school diploma. Wist created tiered curricula and quickly recruited credentialed faculty to keep Normal moving toward becoming a Teachers College. 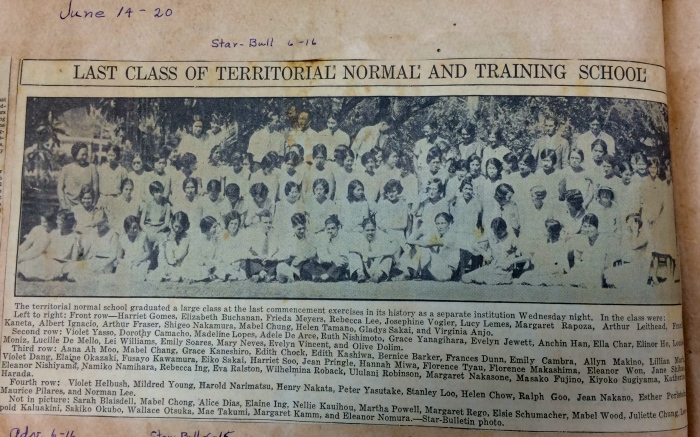 The Americanization of Hawaii’s students was in full force and teachers were expected to be exemplars. Wist was insistent that Normal students exhibit a level of professionalism befitting future teachers. They were expected to demonstrate “refinement” – middle-class manners, dress, and behavior and be adequately skilled in both spoken and written English.

Under Wist, Normal began to more closely resemble a university with its sports teams, including football, a student produced yearbook and a newspaper, student run clubs, elections for class officers, student delegates to Asilomar conferences and competition in oratorical contests, the ubiquitous campus beauty queen contest, even an elaborate dramatic production of the play The Cardinal, which was widely reported on in Honolulu dailies (“Territorial Normal and Training School, Honolulu Newspaper Publicity, 1929 – 1931”).

According to Logan, Wist was in favor of a separate Teachers College, but the Legislature would not fund a separate institution. When David Crawford became UH president in 1927, he expressed his willingness to accept Normal as part of UH, something the previous UH president, Arthur Dean, had opposed. The merger promised to solve the problem of supply and demand by matching admission to Teachers College to future demands for teachers.  The merger made it easier for students to change from an education major, allowing them to continue on and earn a college degree.

According to Robert Forbes in “The Education of a Territory: Origins of Hawaiian Statehood,” the Department of Public Instruction stopped keeping racial data on their teachers in 1929.  Keeping data and making it public, however, are two different things.  We don’t believe for a moment that racial statistics ever stopped being collected in Hawai‘i on anything, including public education; statistics just stopped being shared and openly discussed. Be that as it may, the mapmakers of the “Residential distribution of Public School Teachers, 1931-32” needed to do some digging and correlating to know just how many colored dots to glue where on their map.

A more or less accurate count of the dots reveals that of the 853 teachers residing in Honolulu:
160 were Part-Hawaiian
twenty-eight Hawaiian, bringing the Hawaiian category to 22%
167 Chinese, 19.6%
forty-seven Japanese, 5.5%
374 Anglo Saxon, 43.8%
seventy-five Portuguese, 8.9%
two Korean

What the map tells us, what it can’t

Haole teachers residing in Honolulu clearly outnumbered all the others but with no paper to accompany the map, we’re left to speculate:

. . . there were always teacher shortages and employment was available . . . by 1916 the normal school had only graduated 509 teachers and the average length of service was only 3.47 years (Ruth Shaw, “The Output of the Territorial Normal and Training School,” Master’s Thesis, University of Hawaii, 1929).

In August, 1917, the Advertiser reported that [Superintendent] Kinney had hired a young man named Phil Danky as official greeter at the piers for prospective teachers. Kinney believed Danky had the qualities needed to attract new teachers . . . a fine physique.. . . Again in 1918, Danky was hired, but this time he was sent to California to recruit normal school students to fill vacancies in Hawaii’s classrooms (Logan).

We suspect our mapmakers set out to prove what they already believed to be true.